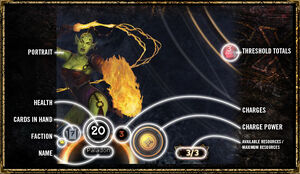 The champion represents you, the player, in the world of Entrath. Each champion has a charge power which will influence your deck, both in what shard you use and what kind of cards you put in your deck. For example, here is Gozzog, the necrotic warrior, and Poca the Conflagrater, an orc mage.

When you play a resource, your hero gains a charge and a threshold based on the resource played. A Blood resource provides a blood threshold, and a Ruby resource provides a ruby threshold. When you have at least one Blood threshold, Gozzog can spend 2 charges to deal 1 damage to a target champion and gain 1 health. This champion is great at extending the game, putting a small amount of pressure on the opponent while providing a buffer against any damage he may do.

With the charge power in mind, you will want to build your deck with the late game in mind. Poca the Conflagrater is great for Ruby decks that want to toast the opponent early and often. Poca can spend 3 charges to put a Blaze Elemental token in play. Add that speedy beater to your turn 3 attack and watch the beads of sweat form on the opponent’s head. There are 20 champions to choose from in the PVP set alone, so you’ll always be able to find the perfect champion for your deck.

When clearing the dungeons of HEX, you’ll first choose a player character for your champion. Just like in PVP, your champion has a charge power, but in PVE, your champion increases in level and potency as he or she gains experience. Your champion’s art changes as well as you go from level 1 to 50.

The difficulty increases as you explore Entrath. You’ll pick up cards and equipment along the way to help you in your journey, and your character also learns from those battles. Your champion will increase in power as they reach the various talent tiers. Every 10 levels (starting at level 10), you’ll choose from three different talents unique to your class. These talent choices will include a variety of gameplay altering effects such as start-of-game benefits like additional health, passive effects like increasing the maximum size of your hand, new charge powers, or even the chance to add unique class cards to your deck.