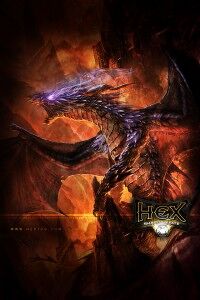 Dragons are mysterious, solitary reptilian creatures that covet wealth and have little interest in the affairs of lesser creatures, insofar as they can help the dragon accumulate more items of legendary value. They are amongst the most powerful mortal beings in the world.

There are three major types of dragons in the world: Wild Dragons, Blood Dragons, and Gem Dragons.

The Wild Dragons, along with their Primal, Gaerrul, were the first of their kind to appear on Entrath. Like all of the early dragons, Gaerrul was heavily infused with Wild Magic, and for about 30,000 years, she was the only Primal of Dragonkind.

When the Underworld races began to crawl up from the infernal depths of the subterranean realms, they included a new breed of dragons that were forged by the hatred and exploitation of Blood Magic. In addition to this malevolent new strain of Blood Dragons, a second dragon Primal named Thrygg appeared.

While Gaerrul and her Wild Dragons were a greedy, vain lot, they were also champions of the natural world’s growth, and integrated themselves into the prosperous ecology of life. The appearance of Thrygg and the Blood Dragons, whose motivations gravitated towards the sinister and corrupt, disrupted the order of the natural world, and set the two factions of dragons immediately at odds. Gaerrul and Thrygg quickly grew to despise each other, and so, hundreds of thousands of years before the Underworld Incursion, the first major skirmishes of the above and below realms occur: the dragon campaigns.

For centuries, the Wild and the Blood Dragons warred, inspired by the rage of their primals, Gaerrul and Thrygg, each infuriated by the mere existence of the other. Each believe that only one dragon primal should exist, and each has the goal that when one of them destroys the other, they will immediately commence with annihilating the opposite of their species: if Gaerrul kills Thrygg, she will obliterate Blood dragons from existence, and if Thrygg kills Gaerrul, he plans to do the same for Wild dragons. As of now, despite dozens of millennia of conflict, neither dragon primal has prevailed.

The dragon situation was complicated with the arrival of Hex. Regardless of whether a dragon has a predilection for Wild or Blood magic, all of them are creatures of tremendous greed. When the world suddenly became littered with an uncountable number of pretty, sparkling, multi-colored gems, the dragons immediately set out to collecting as many of them as they can stash away into their prodigious hoards.

What the dragons failed to understand, though, is that when a large number of Hexing Gems are collected in one place, strange effects can occur. Some of the dragons who were the most successful at hording a multitude of Hexing Gems quickly discovered that the scales covering their bodies rapidly transformed into crystal shards. A few of these dragons futilely attempted to resist this unexpectedly aggressive transformation, and a few even committed suicide. Others, however, embraced the physical changes caused by the Hexing Gems. Those who allowed the transformation to completely finish became the Gem Dragons: former Wild and Blood Dragons that were now Ruby, Sapphire, or Diamond Dragons.

Because they are a completely new species that were formed after the arrival of Hex, there is no Primal for Gem Dragons. As intensely as Wild and Blood dragons despise each other, each of them are even more disgusted at the existence of Gem Dragons, who they believe to be utter abominations. If there is anything that might cause Wild and Blood dragons to end hundreds of thousands of years of war and join together for a single cause, it would be for the destruction of the Gem Dragons, though no such alliance has yet been formed or offered.