This can't ready during your ready step.

While this is exhausted: [Basic] Pay 8 health → Ready this. 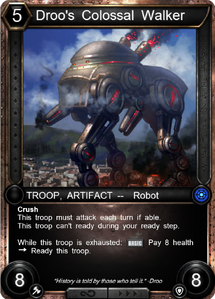 Droo's Colossal Walker is a monstrous Artifact Troop. It boasts [Crush], however must attack whenever it is able. The most significant feature of Droo's Colossal Walker, is the inability to ready during its controllers ready step. This can be circumnavigated at the expensive cost of 8 health to ready this card.

With a resource cost of 5, Droo's Colossal Walker can pose a massive threat relatively early in the game, and can trample over many troops with a similar cost. Some card effects can ready a troop or artifact, and should be used to avoid having to pay health every time the Walker is needed.