Edit
When this enters play, look at the top three cards of your deck. You may put an artifact from among them into your hand. If you do, it gets cost -

. Shuffle the remaining cards into your deck. 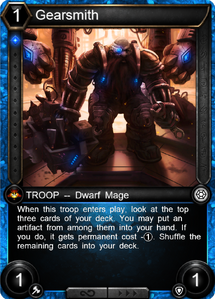 Gearsmith is a Dwarven Troop with the special ability to take an artifact from the top 3 cards of your deck and reduce its cost. If multiple artifacts are found, you may only choose one and the rest are shuffled into your deck; only the selected artifact will have its cost permanently reduced. If no artifacts are found, you will be able to see the 3 cards, however they will be shuffled into the deck. The opponent will be unable to see the cards examined, or an artifact chosen, but will be able to see if a card was or was not taken.