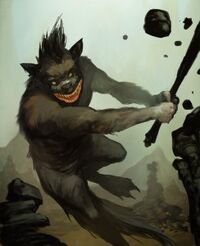 They usually smell like whatever they happened to roll around in that day.

They are brutish, crass, disloyal, and mean. They enjoy mocking their foes almost as much as they enjoy murdering them.

Gnolls loosely organize themselves into clans, centered around an alpha. Kazraga, the king of the gnolls, has been able to stay in power through a systematic application of brutality against any challenger who even considers barking in his general direction. Kazraga’s three sons continually plot against him in their efforts to depose the king from his throne, but the gnoll princes are too insane, stupid, and lazy for any of their plans to succeed against their clever father.

The dwarf region of Scrios is home to the Great Machine Graveyard, a junkyard of discarded robot parts that covers several square miles. A clan of gnolls that call themselves the Scraptooth have settled in the Graveyard, ambushing and eating unwitting travelers merely looking for spare parts for their artifacts. The Scraptooth leader is a ruthless alpha named Scutt, and there are rumors that Scutt has his smartest minions attempting to construct a robot from the various discarded piles of junk that surround them.