Damage dealt to this troop is permanent. 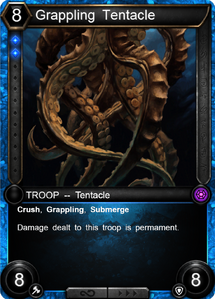 These things show up at random times in the dungeon. They steal cards from your deck rather than dealing damage to you, but if you can kill them, they will give you the cards back. You have to be quick though, because if you aren’t then they will disappear with your cards. The more of them you manage to kill the less of them you might have to deal with when you fight the Kraken! So what does the key word Grappling mean?… When they deal damage they void that many cards instead and when they die they give the cards back. And the Submerge key word means if they are targeted by any effects that don’t deal damage, they leave play with or without cards they’ve stolen. They also happen to leave play and return to the Kraken if they ready and have stolen cards.[1]