When King Gabriel enters play, create [Boldheart] and put him into play. 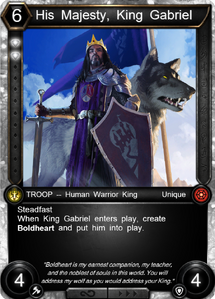 King Gabriel is the supreme monarch of Carloth, which encompasses all three of the human realms. He is intrinsically bonded with his great wolf companion, Boldheart, and together they adamantly serve as exemplars of honor, courage, and strength for the human kingdom as well as for the Ardent alliance.

Gabriel is the oldest of three brothers, all born in Adamanth (as were the previous kings of the human realms dating back 187 generations). As a child he was sent to Cerulea to receive his education, then as an adolescent, it was off to Gawaine for formal military training. Upon returning to Adamanth on the eve of his 17th birthday, he wed Lady Grace Rose, the eldest daughter of Chancellor Delphin Rose of the Academy of Cerulea. Soon after, he ascended to the throne when his father, Henry XLIII, abdicated.

Despite the marriage being arranged since they were barely toddlers, Gabriel and Grace soon formed an enduring bond and quickly gave the kingdom three children. Princess Victoria, the eldest, is a fighter of estimable prowess, though her parents wish she would concern herself with duties more typical of female royalty. Prince Malcolm is currently an Air Captain in the Phoenix Guard, the branch of human civil service that patrols the skies of Carloth on giant songbirds. Prince Stuart, the youngest Boldheart, is an apprentice in the clerical order of the Ancient Kings, where he is learning to cultivate his strong inherent connection with the ancestor spirits of past royalty.

Though he must deal with the occasional skirmish, the three decade reign of King Gabriel has been relatively placid, in that the Ardent coalition has not endured an all-out assault on multiple fronts from the Underworld in some time. However, Gabriel understands his duty is to remain ever vigilant to preserve the existence of his people and those of his allies, as the period of calm from below must only mean that the Underworld is likely preparing for an onslaught of unprecedented devastation.

King Gabriel currently resides in the Citadel of Adamanthia, the castle residence of the human monarchs.