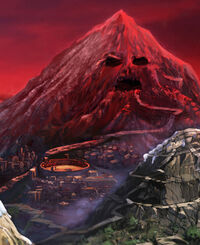 Kog’Tepetl is the primal of mountains and the highest peak in Quash Ridge, homeland of the orcs.

The orcs worship Kog’Tepetl as their god, and have built their entire civilization around the base of the peak. The orc gladiatorial arena is the center of their culture, where violent bouts between orc combatants, feral monsters, and captured slaves are cheered on by zealous spectators. For the orcs, the arena matches are not only displays of martial skill, but they are also religious rituals dedicated to the glorification of the Mountain God.

The fighting floor of the arena is covered in small holes, and the orcs believe the blood of those that are vanquished in gladiatorial combat drip down into the holes to feed Kog’Tepetl.

An enormous face was built into the face of the mountain, with the mouth serving as a deep cave that holds one of the holiest sites in the orc realm: the Cathedral of Stone and Blood. The five High Clerics that serve as the prophets of the orc god, generally regarded as the wisest and most respected members of orc culture, use this Cathedral as their dwelling. In the center of the Cathedral is a pool of blood, bubbling with magical energy. Any orc who wishes to address a High Cleric must bathe themselves in the blood as a gesture of respect.