where X is your health. 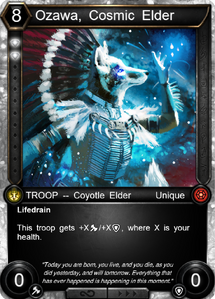 Many call Ozawa the “cosmic elder”, but he waves away that lofty title like a pesky mosquito. If he must be called anything other than his name, he prefers to be called “the Wanderer”. Carrying his only possessions (a thick feathered headdress, a walking stick to help his balance during his wanderings, his pipe, and a blanket to stave off the chill of the night winds on the Plains), Ozawa roams seemingly at random from place to place: the coyotle city of Wakuna, to the Ambling Mesa, to the edge of the human city of Adamanth, to the Vale of Whispers, to the borders of the Feralroot Woods, with no discernible destination. Ozawa believes he has never truly departed from anywhere, so he can never really arrive, either.

Nobody knows how old Ozawa is. The eldest of the coyotle remember hearing tales of Ozawa’s wanderings when they were mere pups. He typically appears at a cluster of teepees at night somewhere in the Howling Plains, shares his stories and his wisdom surrounding a cooking fire, and is shuffling off before the dawn, taking nothing with him but his meager possessions and an evening’s warm fellowship with his kin.

Some believe Ozawa is not a coyotle at all. There are whispers that he is a Primal, or something even more powerful that cannot be fully understood. There are many tales of Ozawa’s “wanderings” through time itself, and that his capability of appearing at any moment from the past or future gives him the illusion of immortality.

From Ozawa’s occasionally cryptic stories of meeting strangers in distant lands and his knowledge of languages that are not spoken anywhere on Entrath, many coyotle are convinced that the “cosmic elder” can walk amongst the stars themselves, and has visited countless worlds that spin in the unfathomable depths of the inky night sky.

There are even whispers amongst the coyotle and their allies that Ozawa is the only mortal in existence that knows the true purpose of Hex. Whenever he is asked if this is true by a coyotle bold enough to ask, Ozawa merely smiles and puffs on his pipe.