When this enters play, create four [Pack Raptors] and put them into your deck.

for each other [Pack Raptor] you control. 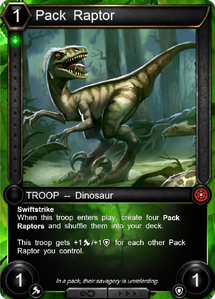 A complex tactic may be used to fill deck with pack raptors by using mimic to produce a replica of Pack Raptor, then Doppelgadget is then used to create another replica pack raptor, after each turn Doppelgadget may target another artifact like Command_Tower then on the proceding turn it can be turned back into a pack raptor each time adding 4 into deck.