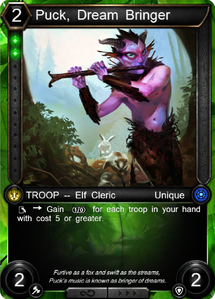 Puck is a world-renowned playwright, classical composer, gourmet chef, classically trained baritone, and virtuoso flautist … according to Puck. Nobody has ever actually seen the elf cleric lift a quill, chop up so much as a carrot, or open his mouth for any reason other than to expound at length on his prodigious wonderfulness.

The one unimpeachable talent Puck actually demonstrates is his ability to create mesmerizing melodies with a variety of woodwinds, primarily the flute. Puck is able to weave Wild Magic into his musical performances, so that the tones he conjures seem to emerge from the earth itself, each note a living entity unto itself, as dense as a tree branch but lighter than a dandelion seed lilting on a spring breeze. Some claim to be able to hear wisps of Puck’s flute hundreds of miles away, days after a performance.

Puck was a youthful 120 years old (an adolescent in elf terms) when the Underworld Incursion erupted simultaneously from beneath several areas of the surface world, including the Feralroot Woods. Puck was a persuasive advocate for the typically isolationist elves to accept the humans’ offer of forming an alliance of surface races. Despite initial resistance to the idea from the Aryndel Council, once the elves agreed to unite with the Ardent alliance, they quickly became one of the fiercest adversaries the Underworld would face in their savage but ultimately doomed attempt to obliterate the surface societies.

Puck would become known as the “Dream Bringer”, a moniker he earned during the Incursion. His role was to use his Wild Magic-infused music to sneak beyond the battle lines and infiltrate the dreams of sleeping enemies the night before significant battles, conjuring realistic nightmares that showed them being slaughtered by Ardent forces. This prevented the Underworld aggressors from achieving a restful slumber, and implanted notions of imminent failure into their subconscious as they would launch themselves into battle the following morning.