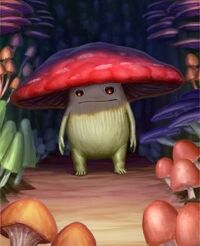 The shroomkin are a race of sentient mushrooms. Their disposition is generally serene and cheerful.

For centuries, the shroomkin lived happily in their fungus-infested subterranean caverns. They built an unsophisticated, peaceful society and lived a contented, simple existence with no ambition other than to be passive and comfortable.

One thousand years ago, the shin’hare were driven underground by the humans and the elves in an effort to exile the aggressive rabbits from the surface world once and for all. Soon after establishing themselves in the underground jungles of Monsagi, the shin’hare discovered the existence of the shroomkin and quickly enslaved them. The shroomkin did not resist their bondage, mostly because they did not know how.

For centuries before being driven underground, the shin’hare had tried and failed to enslave a number of the surface races. Now that they had successfully subjugated an entire species, the shin’hare unleashed all of their sadistic tendencies on the shroomkin. They use the fungus people as manual laborers until they die from overwork. They kill shroomkin and grind them into a fungoid paste to feed to their rabbit litters. Shin’hare warlocks consume shroomkin souls in gruesome Blood Magic rituals. Rangers and warriors use living shroomkin as walking target dummies.

Shroomkin generally communicate through various fungal appendages that they use as a rudimentary sign language. They are capable of speech, but they rarely talk, mostly because they forget they can.

Most shroomkin are about two to three feet tall, with a bulbous, mushroom-like head. However, the fungus people do occasionally appear in more extreme sizes, from tiny waddling balls of shrooms no bigger than a shin’hare’s foot all the way to mutated monstrosities a hundred feet tall. There are shroomkin in the shape of various animals, such as horses or dogs, that the shin’hare subdue and use as beasts of burden.

Despite the unending cruelty and dominance of the shin’hare, the shroomkin always maintain their contented disposition. So far, they have made no attempt to free themselves from their oppression.