Edit
At the start of your turn, create a random non-unique Shin'hare and put it into play. 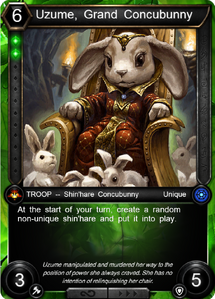 One of the most powerful practitioners of Wild Magic in the world began life as all shin’hare do, as one of a litter of anonymous rabble. Shin’hare kits are not given names until they are six months old, so as not to waste time on the ones that do not survive (who do not deserve to be identified because of their weakness, according to shin’hare culture).

Not only did little Uzume live long enough to receive her name, she thrived in an environment that rewarded ruthless ambition. Shin’hare gender roles are fairly egalitarian, in that all of their kind are equally entitled to be hurled into battle in massive battalions of expendable troops. Females do have one advantage over males, in that if they are lucky enough to survive into sexual maturity, they have a remote chance of being selected to become a concubunny, where they will be forced to produce innumerable litters, but also enjoy a degree of luxury and social privilege rarely experienced by any shin’hare of common birth.

When Uzume discovered that she, along with half a dozen other young females, were being considered for a lone concubunny opening, she murdered the other candidates. This not only eliminated her competition, but earned her a level of respect amongst the Concubunny Council, overseen by the Grand Concubunny, Akako. Of course, earning her spot amongst the concubunnies was not enough for Uzume, as her ultimate ambition was to sit in Akako’s chair, and she wasn’t willing to wait decades for the current Grand Concubunny, her life unnaturally extended by pervasive Wild Magic, to die of natural causes.

With aggressive political manipulation and her natural capability of producing abundant litters that had exceptionally low mortality rates, Uzume worked herself into a position to be selected as Grand Concubunny upon the death of Akako, which occurred when she ingested a poisoned rutabaga provided by a Milky Eye assassin contracted by Uzume.

Now that Uzume has lobbied and killed to get to the position of power she always craved, she has no intention of relinquishing her chair. She actively identifies females that appear to have a glint of ambition and gets them shipped out to the front lines. She does not want to make the same mistake that Akako did, and ensures that the concubunnies under her command are docile and politically inert.