Edit
watch 01:25
Jurassic World: Dominion Dominates Fandom Wikis - The Loop
Do you like this video?
Play Sound
When Xarlox deals damage to an opposing champion, bury the top three cards of their deck. Create a [Spiderspawn] for each troop buried this way and put them into play. 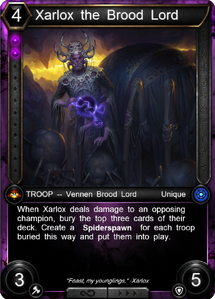 All vennen are the children of Xentoth, the Primal of Blood Magic. Every so often, Xentoth lays a throng of vennen eggs, which she leaves under the care of the Brood Lords.

Xarlox spent the first few decades of his life as a member of an infiltration team that would attempt to assassinate important officers in the orc military. As satisfying as it was to tear out the throats of heretics and burn their blasphemous bodies in purple fires of cleansing Blood Magic, Xarlox felt his true purpose was amongst the young as an educator and role model. The role of the Brood Lords is not only to care for the vennen young shortly after they hatch, but to instruct them of the essential truths. They are taught of the “just war” against the heretics, a group that mostly includes all living creatures that are not vennen. A specialized, intensified hatred is reserved for the orcs, who the vennen believe are the living embodiment of sacrilege, and that their very existence is a profanity.

Xarlox tells his young students of the atrocities he claims to have personally witnessed in his time as an assassin. Such as how the orcs build meticulously detailed effigies of Xentoth only to burn them down as they dance around, spitting and cursing and fornicating. He tells his wide-eyed students of the orc arena, where they hold depraved ceremonies and eat their own babies in wicked orgies of unrestrained bloodlust. Xarlox would admit that perhaps these tales are a touch exaggerated, but they serve their purpose: when the young vennen leave the care of the Brood Lords, they take with them a unbridled hatred of all orcs, despite the fact that they have never seen one.

Xarlox also oversees the incubation slaves, captured enemies of the vennen who are bound by webs and used to nurture a variety of spiderspawn. Keeping an incubation slave alive requires a delicate application of Blood Magic that Xarlox learned from his time as an infiltrator, in those instances when he had to keep interrogation subjects alive long enough to extract essential information.

There is little glory to be earned from being a Brood Lord, but Xarlox doesn’t instill zealotry, hatred, and fanaticism in his students for praise or gold. He does it for the children.