This article is about the PvP card of Zoltog. For the Mercenary, see Zoltog (Mercenary).

When an Orc troop you control deals damage to a champion, create a [Savage Raider] and put it into play. 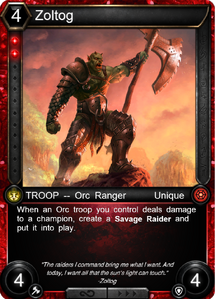 Zoltog was born in a filthy Ayotochi alley to a prostitute who bled to death while screaming curses at Kog’Tepetl. Entering the world tainted by multiple egregious blasphemies, the shrieking infant was given his first tattoo: a misshapen triangle on his chest, symbolizing a rat’s tooth, informing the world that he was little more than gutter vermin and should be left to starve to death and be quickly forgotten. However, despite this branding, the tiny, squalling orc was taken by a band of outlaws and sold to a contingent of rangers stationed near Mazat Crater. Their numbers had been so decimated by incessant vennen attacks, the rangers were willing to raise the unwanted orphan as their own, if it would mean bolstering their ranks by training one of their own.

The moment he grew strong enough to lift a spear or axe, Zoltog was throwing them at squirrels (and hitting quite a few). When he was four, he was brought on his first raid, and he was a mere eight years old when he killed his first vennen. He quickly mastered trap-making and skinning. He would often hunt blindfolded, so he could learn not to depend solely on his sight and hone his other senses.

Despite his youth, Zoltog’s unceasing aggression and determination to enhance his acumen as a hunter inspired the other Mazat rangers to see him as a natural leader. In addition to their duties in guarding the Crater against Underworld strikes, his rangers are responsible for raids that would provide food and weapons, as well as capture a variety of creatures to be brought to the gladiatorial arena for battle.

Whenever he makes the trek to Ayotochi with a group of captured ogres or gnolls in tow to be handed over to the gladiatorial council to be used for arena fodder, Zoltog is always struck by a dizzying sense of unease, mostly due to his origins as an urban gutter rat, fit only to be starved to death. Though he now has a multitude of tattoos covering his body, he keeps a margin of un-inked flesh surrounding the rat’s tooth to keep it prominent as a reminder that he is not supposed to have lived at all. He survived to become a creature of the open ranges, a leader of the orc rangers that hunt and sleep under freezing mountain skies, and a vigilant sentinel forever watching for enemy infiltration into the sacred lands under Kog’Tepetl’s domain.